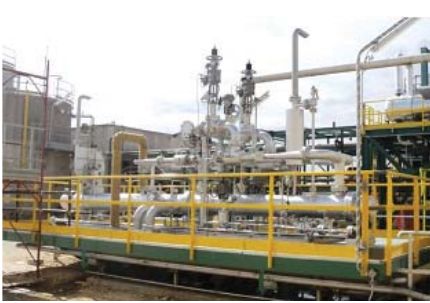 The efficiency of a Steam-turbine is mainly determined by the pressure of the steam at its outlet. The Turbine Surface Condenser is therefore maintained under vacuum. To enable this, the Steam Jet Ejector Vacuum System must be capable of removing all non condensable and associated water vapour from the Surface Condenser to produce the minimum steam condensing pressure consistent with physical dimensions and heat transfer and to provide for deaeration of the condensate.

The sources of non condensables include air leakage through all system components operating below atmospheric pressure, gases released from feedwater drains and vents admitted to the condenser, gases released for make-up admitted to the condenser, condensate surge tank when utilized in a closed cycle and disassociation of feedwater into oxygen, hydrogen and non condensables.

The recommended design pressure of the Steam Jet Air Ejector (SJAE) System is as follows :

Usually, the SJAE system is of Twin Element type i.e. of duplex design having two identical Ejectors per stage, one of which, being in operation at any one time and the other as stand-by. The Inter and After Condensers are generally Single Element type.

The System also includes a Hogger / Start-up Ejector with Silencer for fast pre evacuation and which is in operation only till the desired vacuum has been achieved. Thereafter, the two stage holding ejectors take over.